Your basket is empty

No Yes, change to {{geoCountry.name}} store

Please select the store for the country where your order will be shipped to. This will give you the correct product pricing and delivery times for your destination. 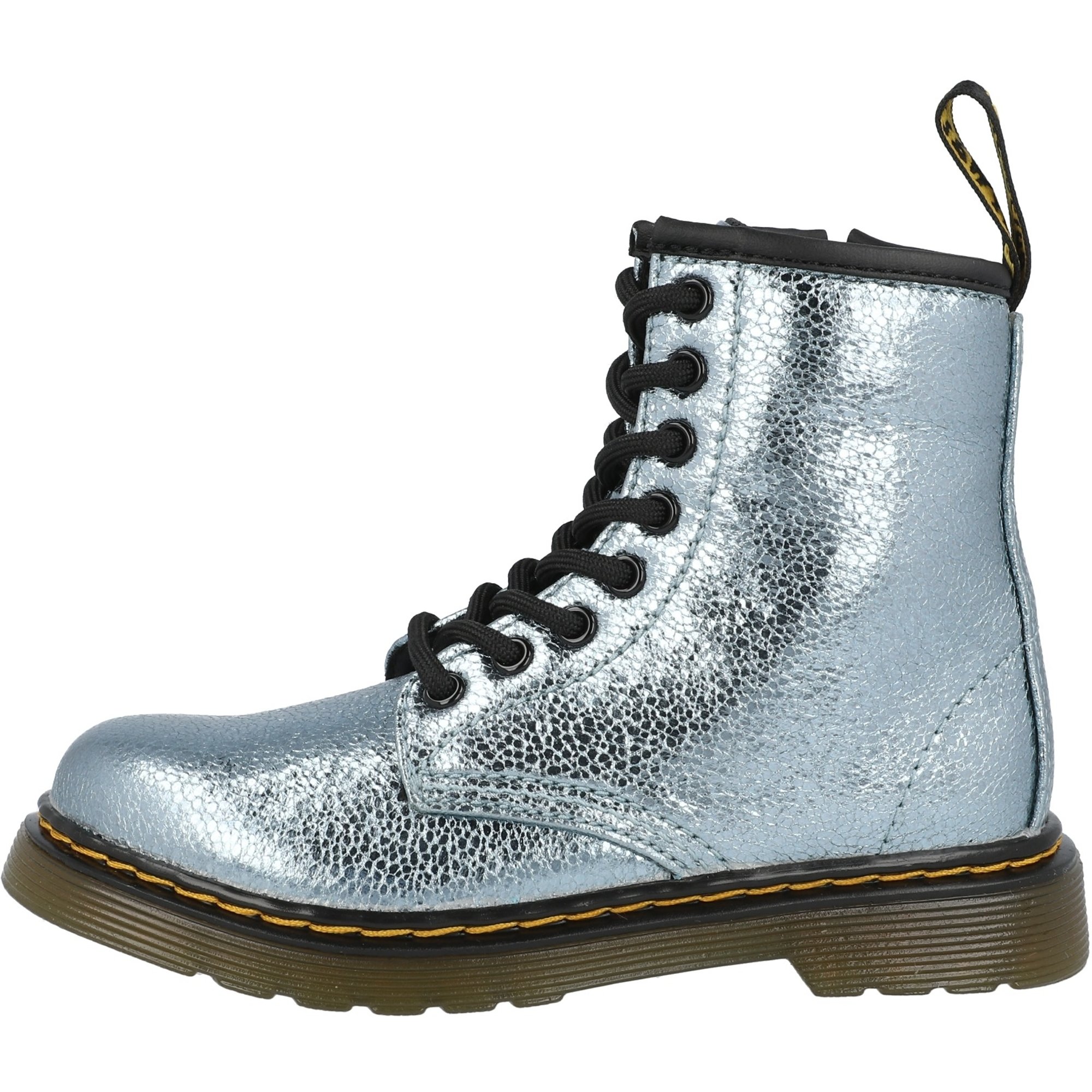 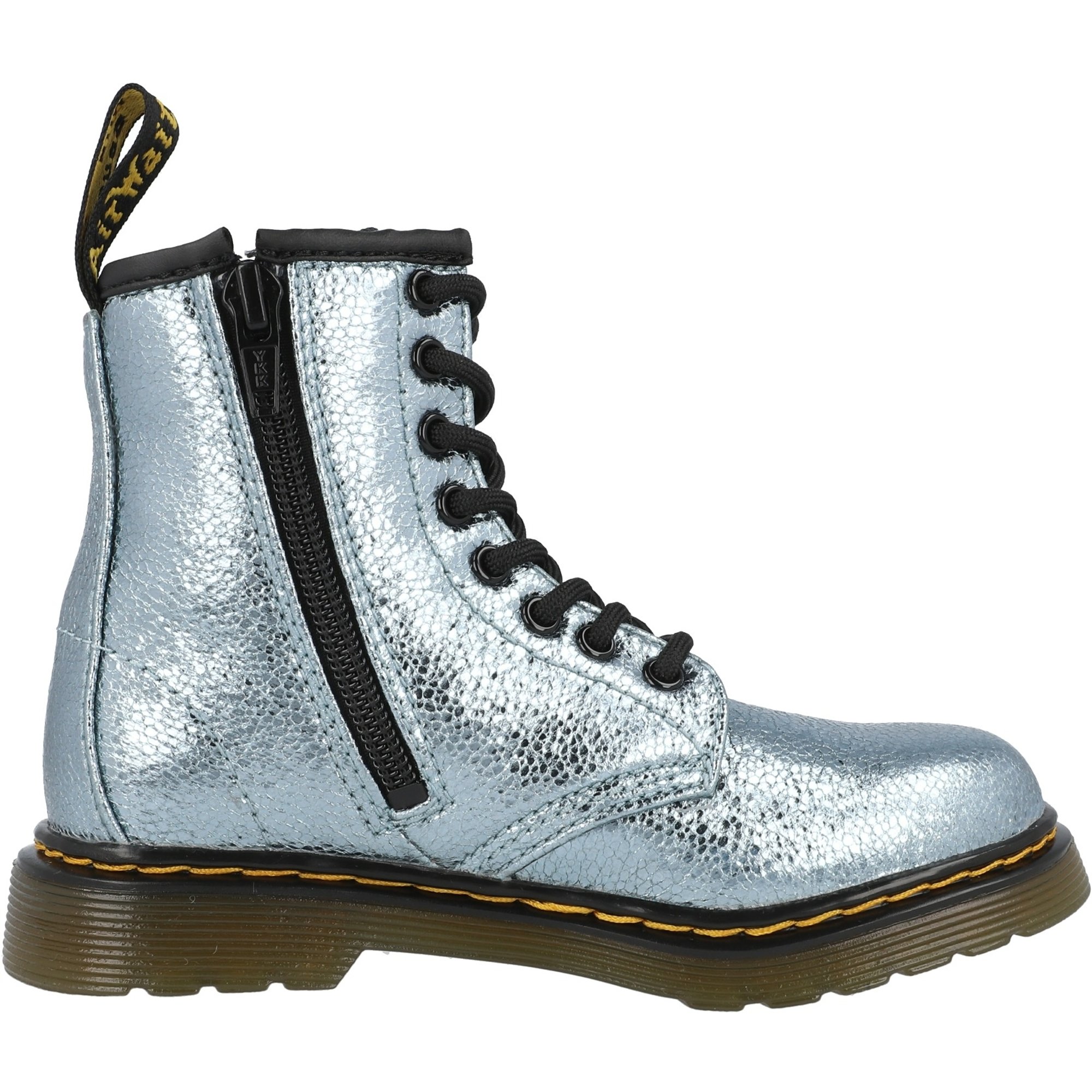 Dr Martens 1460 J Teal Crinkle Metallic boots define generations of rebel style and fashion. With yellow stitching and an air-cushioned sole, each pair is chunky, durable and comfortable. Go for this iconic leather boots to complete just about any look. 😎

We accept the following payment methods:

We aim to dispatch all orders within 24 hours, or 48 hours during sale periods. Estimated delivery times are to be used as a guide only and commence from the date of dispatch.

We deliver to the United States on a duties paid basis, which means that all import taxes and duties are included in the product price.

Please refer to our Delivery Information for further information.

If for any reason you want to return your order you can return it to us in a resalable condition within 28 days of delivery for a refund.

To make returns simple we will provide you with an easy return label to return your order from your local post office. There is a $9.95 charge for use of this return label which is deducted from your refund.

Please refer to our Returns Policy for further information.

I have a printer 🖨

Download the simple and free to use Size Finder™ Paper Ruler and follow the instructions included with it to measure either your own or your child's foot length from the comfort of your own home.

Don't forget to check your printer settings are marked as "Do not Scale" – otherwise the ruler won't give the right length.

I don't have a printer 📏

To measure either your own or your child's foot length from the comfort of your own home all you need is a wall and a ruler.
Follow the steps below for each foot and take the largest centimeter size:

There is no need to add any extra centimeters as we've already calculated growing room into all our measurements.

What people are saying

Love love love  Lovely boots  Great classic boots  Great Pair of Doc's  Loved this boot  Great Boots  Great DOC  Overall best boots!  Great quality  Good looking shoe, stylish, excellent value  These boots are perfect  Is that the laces on the right boot tend to get undone  Love everything about them!  Perfect for cold weather and stomping around in puddles while looking good!  They broke in quickly and look great  Very comfortable and great in rainy weather

Which language people are using

Share your thoughts with other customers and let them know what's good and what's bad about this product.

Still my favorite stompy boots! I did put my own insoles in for arch support, which there was plenty of room for and their insoles are removable, yay. These seem like the same Docs as last time I bought them, so I have to disagree with some of the other reviewers on that.

My favorite boots ever. I wear a womens size 5 but in this boot a kids size 3 fits me perfectly. The color goes with everything. Love love love. I'm on my second pair. The old ones lasted a while and it was mostly my fault they got ruined. I ordered a new pair right away.

My daughter loves them!!!

The last Dr. Martens (1460s) I owned lasted for over five years of heavy use. They were produced in England. These ones were produced in Vietnam - so it will be interesting to see how long they last. They broke in quickly and look great. I would recommend to anyone. I had to order a full size smaller than last time too?

I Finally broke down and bought a new pair of Doc's. My other pair, which are 20 years old, were looking a bit rough. So glad I did! They Feel Awesome. Great Boots.

My daughter loves these! They are really cute and the sparkles are nice for the holiday season to dress it up a bit. All her friends wanted a pair after she wore them. The zipper opening is great too! They should have this on the adult boots. I would recommend these boots.

They are comfortable and they last longer than any other ones that I have owned! I I’ve been purchasing Dr. Martens boots for the last 15 years.

Where do I begin with one of the most famous and classic boots of all time? I'm happy to say that these are my third pair going, and my first Made in England pair - I got the cherry red (now called oxblood). And I'm completely happy so far. True, you do begin with a bit of hell as you need to break them in, but that's a trademark quality of, well, quality leather boots. But then, you're rewarded afterwards with not just heaven, but heaven for a lifetime. Two years down the road, the toes have very visible creases already (I'm a very abusive wearer, apparently, and I always tend to tiptoe or bend my feet), but zero signs of deterioration, and the promised heaven of comfort. Not only are they tough and comfortable, they're really handsome and timeless-looking, but with a modern twist, owing to its dark red color rather than the more traditional brown. Unlike many Docs fans out there, I wear mine mostly with the pants down, as I reserve them for rather smarter get-ups (for purely casual, I turn to my Timberland or Caterpillar classic boots), but I have also tried wearing them with skinny jeans either rolled up or tucked in, or with shorts, with equally happy results. My only complaint, which I notice has happened to ALL the 1460s I've owned, is that the laces on the right boot tend to get undone, even with the most proper of lacing. I've remedied this by lacing them non-traditionally - I lace up to just the 6th or 7th eye up, wrap them around the back of the boot, then just do a double knot. Not only is it more secure for me, it's a versatile look I can rock regardless of how I wear them. I did say that these are made in England, which is perceived as being of superior quality to made in China - so far, none of my MIC boots have failed me, so I can't speak about it, though I DO feel the boots are a lot less flimsy. As such, while it's been two years, I expect two and twenty more of long-lasting use - and by then, I'll replace them with yet another pair. Perhaps a black one that time.

Every person I've talked to has said that breaking in docs was a huge pain but that the end result always made it worth it. For me breaking them in was super easy and only took about a week. All I did was put some balsam on them and then wear them all the time. I originally got these boots because I needed something slip resistant for a kitchen job. However, they didn't really do that great of a job of being slip resistant. That wasn't a big deal to me though because after they got dirty on my first day I realized I cared too much about them. These boots look great and I'm hoping to wear them for years.

My Docs are the best purchase I’ve made in awhile. Totally worth the price. The material is durable which I know will last me awhile. I can wear these shoes with anything - a dress, some jeans, a skirt! They did take me a few wears to break them in, however, after a month of having them they are totally comfortable to wear!

Share your thoughts with other customers and let them know what's good and what's bad about this product.

What our customers are saying 💬

Keep up to date with the latest trends, competitions and much more 👟🙌

🏷 Tag for a Swag Bag

Tag @{{account.handle}} in one of your Instagram posts or stories to enter to win a coveted Awesome Shoes swag bag!

Whether it's showing off your new shoes, or going on an adventure, we want to see how creative you can be.